A version of this story appeared in CNN’s Meanwhile in China newsletter, a three-times-a-week update exploring what you need to know about the country’s rise and how it impacts the world. Sign up here.

Since summer began, scenes of devastation and misery have been playing out across China as the world’s most populous nation grapples with an unrelenting torrent of extreme weather emergencies.
Scientists have been warning for years that the climate crisis would amplify extreme weather, making it deadlier and more frequent. Now, like much of the world, China is reeling from its impact.
Since the country’s rainy season started in May, heavy rainstorms have brought severe flooding and landslides to large swathes of southern China, killing dozens of people, displacing millions and causing economic losses running into billions of yuan.
In June, extreme rainfall broke “historical records” in coastal Fujian province, and parts of Guangdong and Guangxi provinces. At the same time, a heat wave began to envelop northern China, pushing temperatures over 40 degrees Celsius (104 Fahrenheit).
That heat wave has now engulfed half the country, affecting more than 900 million people — or about 64% of the population. All but two northeastern provinces in China have issued high-temperature warnings, with 84 cities issuing their highest-level red alerts last Wednesday.
In recent weeks, a total of 71 national weather stations across China have logged temperatures that smashed records. Four cities — three in the central province of Hebei and one in Yunnan in the southwest — saw temperatures reaching 44 degrees Celsius (111 Fahrenheit), according to the National Climate Center.
People queue at a Covid testing site in Beijing on June 13.
The stifling heat has coincided with a surge in Covid cases, making government mandated mass testing all the more excruciating for residents — including the elderly — who must wait in long lines under the sun. It has also become a dangerous task for health workers who, as part of the government’s zero-Covid policy, are required to spend long hours outdoors covered head to toe in airtight PPE equipment as they administer the tests.
Several videos of Covid workers collapsing on the ground from heatstroke have gone viral on social media.
The heat wave has also caused power shortages in some regions and hit the country’s crop production, threatening to further push up food prices.
And the worst might be still to come, according to Yao Wenguang, a Ministry of Water Resources official overseeing flood and drought prevention.
“It is predicted that from July to August, there will be more extreme weather events in China, and regional flood conditions and drought conditions will be heavier than usual,” Yao told state-run Xinhua news agency last month.

China is a “sensitive area” that has been significantly affected by climate change, with temperatures rising faster than the global average, according to the country’s latest Blue Book on Climate Change, published by the China Meteorological Administration last August.
Between 1951 and 2020, China’s annual average surface temperature was rising at a pace of 0.26 degrees Celsius per decade, the report said. Sea levels around China’s coastlines rose faster than the global average from 1980 to 2020, according to the report.
The changing climate can make extreme weather events — such as summer floods, which China has grappled with for centuries — more frequent and intense, said Johnny Chan, an emeritus professor of atmospheric science at the City University of Hong Kong.
A warmer atmosphere can hold more water vapor, potentially leading to heavier rainstorms, while global warming can alter atmospheric circulation, which can contribute to extreme weather such as heat waves, Chan said.
“We should be really concerned, because these extreme weather events actually affect the most underprivileged, disadvantaged and vulnerable parts of the population — those in the rural areas, or those who don’t have air conditioning or live in very crowded conditions,” Chan said.
For China, the sheer size of its population and economy means the scale of damage caused by extreme weather events is often massive.
Tropical cyclones, floods and droughts are estimated to cost China about $238 billion annually — the highest in the Asia Pacific region and nearly three times the estimated loss suffered by India or Japan, according to a report released last year by the World Meteorological Organization.
Heat wave-related mortality in China rose by a factor of four from 1990 to 2019, reaching 26,800 deaths in 2019, according to a Lancet study published in 2020.

Meanwhile, many Chinese are only just beginning to realize that climate change will affect them personally.
In 2019, researchers found that compared to other countries, public concerns over global warming and climate change in China were “relatively low.”
The Chinese government has promised to bring greenhouse gases to a peak before 2030 and to achieve carbon neutrality by 2060.
For many Chinese, the dangers of extreme weather fueled by climate change hit home last summer, when devastating floods killed 380 people in the central city of Zhengzhou, the provincial capital of Henan province.
Last July, the city of 12 million was pelted with what its water station called a “once in a thousand years” downpour, but local authorities were ill-prepared and failed to heed the five consecutive red alerts for torrential rain — which should have prompted authorities to halt gatherings and suspend classes and businesses. Flood water gushed into the tunnels of the city’s subway system, trapping hundreds of passengers and killing 12 of them in a tragedy that gripped the nation.
Liu Junyan, climate and energy project leader for Greenpeace East Asia, said the Zhengzhou flooding was a wake-up call for the Chinese government and public.
“The central government and local governments started to be aware that climate change is such an enormous threat to society and its sustainable development,” she said, adding that she has noticed more discussions about climate change and extreme weather in China’s traditional and social media.
Since last summer, many Chinese cities have improved their emergency response systems for extreme rainfall. In May, authorities in the southern metropolis of Guangzhou suspended schools, advised residents to work from home, closed construction sites and suspended public transportation in parts of the city following alerts for torrential rains. 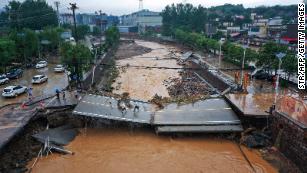 ‘Once in a thousand years’ rains devastated central China, but there is little talk of climate change
This June, the Chinese government released a new policy document to improve its response to climate change, which it said was not only creating long-term challenges but also made the country more vulnerable to “sudden and extreme” events.
“Climate change has already brought serious adverse impacts to China’s natural ecological system, and has continued to spread and penetrate into economy and society,” the government said in its national climate change adaptation strategy.
It vowed to make China a “climate-resilient society” by 2035, by building a nationwide system to monitor and assess climate risks, and by boosting early warning capabilities.
Liu said the policy document is a “very big and ambitious” piece of guidance for local governments, but it lacks details on implementation.
“The impact of climate change can be very localized and its threat to vulnerable communities can be very different from place to place,” she said. “Local governments still need to develop more detailed and tangible plans to implement this grand strategy.”
By Texas AM University| 2022-09-09T18:26:07+00:00 September 9th, 2022|Member News|0 Comments